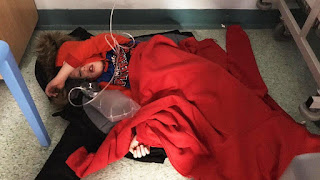 Following a (obviously fake) post I saw yesterday on Facebook which was trying to debunk the ‘a kid with pneumonia lying on coats on the floor in hospital’ incident I thought I might share a selection of my first-hand, and worrying, experiences with the NHS - all of these occurred within the last 3-4 years:

1 - I spent a lot of time in a Chemo unit which was so understaffed that the 3 nurses who were running it (should have been 6-8) were having to run from machine to machine to keep up.

2 - I spent 11 weeks in specialist gastrointestinal ward in London. During my stay staff shortages were extreme and most of our nurses would arrive at least an hour early and leave a couple of hours late just so they could get the job done.

These issues were compounded by the fact that about half the other people in my ward were *actually* there because of mental health issues that there wasn’t proper support for e.g.:

One chap kept pulling his stitches open in order to avoid having to go home.

Another had an Oesophageal tear (very dangerous) and was only supposed to be on liquids but would sneak-out to get McCoys crisps and eat them whole in order to try and reopen the tear. He was a very intelligent chap but homeless (due to having been kicked-out by his wife) and had nowhere to go if he was discharged.

And yet another didn’t even have a gastrointestinal condition. He had a stab-wound to his hand, was violently schizophrenic and would regularly threaten the staff/patients. I woke up with him standing over my bed one night which was fun.

3) - I spent another pleasant week in QEQM (Margate) in the ‘clinical decisions unit’ - basically a bed in a corridor next to the toilet - because there wasn’t space for me in London and the non specialist staff in Margate couldn’t work out what to do with the 15-20cm abscess that had appeared next to my scar. It finally burst at about 3am at the end of that week and a poor nurse was left to mop-up/squeeze-out about a litre of puss from my back.

4 -  Unrelated to my own medical issues - I once attended A&E on a Tuesday evening in Margate as a friend had fallen and dislocated/smashed his shoulder to pieces. We arrived at about 7pm, he had to wait in reception for about 4-5 hours with only a few paracetamol for pain relief and when we finally got in to the clinical area he was put on a trolly next to the printers in the corridor. He wasn’t actually seen by a physician until about 3-4am and was finally given a proper bed at about 9am - 14 hours later.

During that time we witnessed doctors having to literally sprint from patient to patient, a homeless couple repetitively overdosing on tranquillisers just to avoid being kicked-out into the cold, a poor old guy with dementia roaming the ward - abusing other patients and on one occasion tampering with another patient’s IV pump.

The issue was clear - due to the closure of Canterbury hospital most of the beds in A&E were taken-up with elderly patients who they didn’t have space for in the wards.

Conclusion:
Within all of the above, I can fault very, very few of the people who looked after me/us and - quite simply - without them I wouldn’t be alive today. But, it’s clear to me that the NHS is now at breaking point and that something needs to be done.