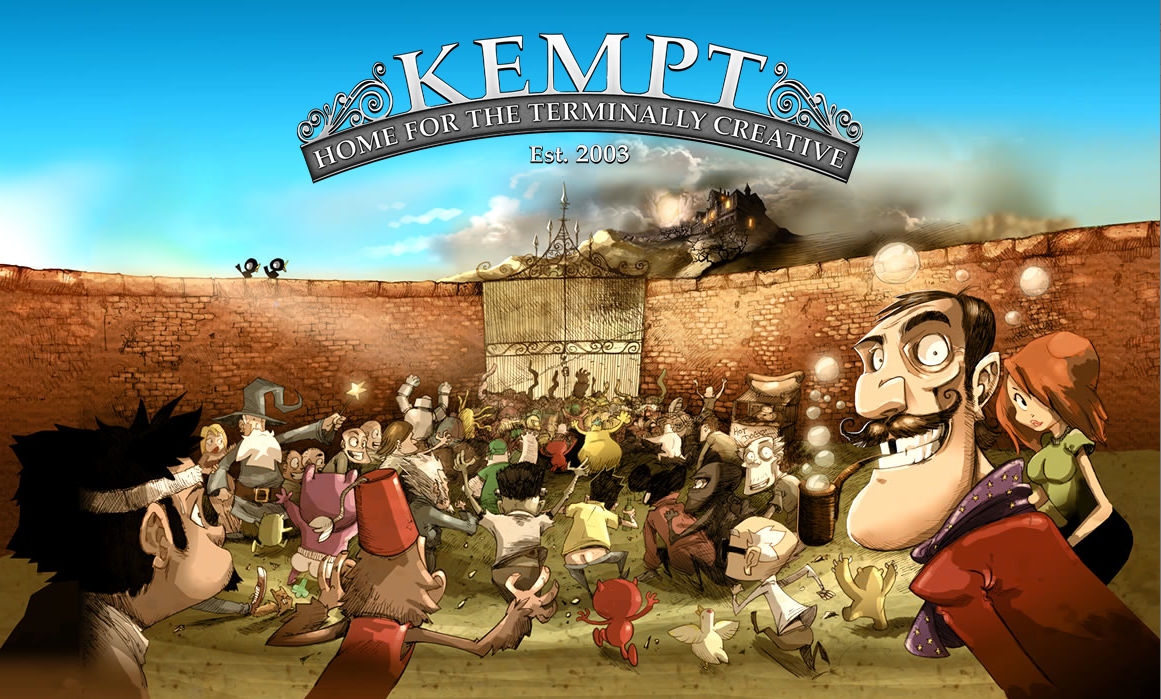 The Beginning I (rashly) set Kempt up in early 2003 after a meeting with my boss (who I liked very much) and his boss who... lets just say I wasn't fond of.

I'd been working crazily hard for them and we were doing super-well, but despite that I'd been stiffed on my annual bonus for the second time running and was desperately unhappy with the way things were being done.

As I walked out of that meeting I realised that I could no-longer work for someone who didn't value me, and that I was tired of all the frustration. I resigned almost immediately and resolved to set something up for myself - a company which would learn from their mistakes.

Kempt was founded on a set of core ideas which - I guess - later became our culture:

The original plan was that Kempt was going to be a broad-service production/creative agency doing web, print and video work but in about 2007, after having built and released about 50 assorted flash games, I realised that we were in fact a game studio.

In late 2013 I realised that 10 years doing the same thing was too much and that it was time for a change. I decided to pivot Kempt towards producing its own IP and we built a series of games based around a single world/set of characters known as 'The Magnificent Stunts" which I pitched as an investment opportunity on the BBC's Dragons' Den. By the time the show was aired three of the games had been released and we received hundreds of thousands of installs as a result. The final instalment 'Stunt Wheels' was released on iOS in May 2015 and is still live in the App Store.

However, despite this apparent success we were scuppered by one small error. A mistake had been made in the code that showed the advertising which meant that when we finally got a hit we didn't make anywhere near as much money as we should have done. Hundreds of thousands of pounds worth of effort was thrown away for the sake of one five-minute check, a mistake I will never see made again.

Bruised and battered, I took us back to doing work for hire development. Then, in spring 2015, the studio business was acquired by a larger studio group and the name changed to 'Burke & Best'. Kempt continued to exist as a vehicle to support our games (you can still play a few) but - for all intents and purposes - it was the end of our studio's journey.

Since then I've continued to build (mostly very stupid) games - first at Burke & Best and now at my new company - Dead Five - which I setup with some of my old teammates in December 2019. Dead five shares some sensibilities with Kempt but is, perhaps, a little more 'punk' in its ambitions.

In between building games for clients (and the odd website here and there) we also embarked on a number of other entrepreneurial initiatives with a modicum of success - these included:

A Flash game/viral tracking system that we launched in 2007. It was way ahead of its time (it pre-dated Google Analytics) in terms of performance, features and sophistication and - as a result - it was used by many of the world's largest brands including Pepsi, Red Bull, Lego and even as the standard game tracking system for the BBC.

Launched in late 2004 our viral games site pre-dated many of today's major games portals and featured all our client's games, some bespoke games we made for it and a bunch of our competitors' games too! It attracted hundreds of thousands of visitors every month and raised tens of thousands for AIDS awareness charities in the process.

Our second game portal was launched to celebrate our love of stupidly simple games - particularly when played in very quick succession (a la Wario Ware) - it was home to 45 micro-games, a playable collection of them called TinyTrials and another 21 client projects which were published under that label.

Sadly most of the work mentioned above is no-longer available to play or use but you can find more information in my Gameography and gameplay footage on my YouTube channel.

By Chris Kempt
Today I visited a local school to do a careers talk - one of many that I've done in the area since we moved here. As ever it was loads of fun to do - it's great to chat to kids about the industry and, lets face it, Me is one of my favourite subjects :) Anyway - since the talk is fresh in my head I thought it might be useful to jut down some of my key tips in case someone out there can benefit. So here we go: If you want to have a great career in the creative industries I suggest you: 1) Be Interested As well as interesting. Whilst you should be proud of your ideas and skills, remember that experienced people probably won't be so impressed initially. They're probably wrong, you're definitely going to be the next big thing, but there's still a huge amount you can learn from them. Remember that creative people love to talk about themselves so, be interested, ask as many questions as possible and wait for them to be interested in you. 2) Be Confident Follo
Read more