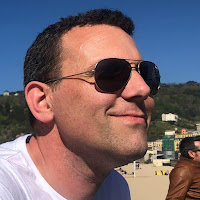 Hi, thanks for your interest in both me and my work, you can find a more formal summary of my career on my LinkedIn profile but I want to be a little more casual here.

In the late nineties, after graduating in Fine Art, I fell into the fledgling internet industry and over the following years I worked my way up from basic web design to developing cutting-edge web applications including: the world's first online 3D CAD system, interactive education materials and some of the first internet games.
In 2001 I was headhunted to run production for the world's biggest dance music website - ministryofsound.com - but I couldn't set-aside the potential I saw in viral games and Flash as a format so, in 2003, I decided to go freelance and chase that opportunity down. Having started as a sole developer I quickly found myself to collaborating with other creatives in my network - artists, animators, designers and better programmers than I and - by 2007 - Kempt had become a fully fledged studio employing 10 people full-time releasing an average of 10 games a year entertaining hundreds of millions in the process. We were privileged to work with a diverse range of clients from brands like Sony and King of Shaves, media businesses such as MTV and Nickelodeon and institutions including the United Nations and Mensa.

In around 2009 Kempt made a successful transition to mobile games, spent most of the next few years working on Red Bull’s ‘Kart Fighter’ game franchise and worked on a variety of own-IP projects including 'The Magnificent Stunts' which was featured on the BBC’s Dragons’ Den.

We then raised a six-figure sum to grow the studio business, separated the company's IP activities, re-launched the studio as ‘Burke & Best’ and worked with Adult Swim to produce the chart-topping Amateur Surgeon 4 among other titles.
The core team and I exited Burke & Best in July 2019 and setup Dead Five - a HyperCasual game studio designed to capitalise on the clear opportunity I saw in that space to refine production values and increase monetisation. Over the following 2.5 years we built more than 50 prototypes to run CPI tests with, built several out to release and even won an award. Sadly though the all-important hit was elusive so in early 2022 we took the decision to close the studio and pursue other opportunities - you can read about the reasons behind that decision here.
Alongside all that I also managed to father two remarkably well balanced sons and learned to skate surprisingly well for a bloke in his forties, drive moderately quickly around a track and mostly hit a archery target at 50yds.